In the second half of the twentieth century Baghdad had settled different projects handled by important architects, which some have been executed, others not. Le Corbusier was asked to design the Sports City, a huge complex that was supposed to receive stadiums, infrastructure... In the end this project did not emerge in its entirety, but after the death of the architect, Saddam Hussein had wanted to achieve the project of the gymnasium. This one was led by French engineers and built by a Japanese construction company.

The new Iraqi government has wished to resume the development of the gym and decided to redevelop it to become a symbol of a new freedom. We have been entrusted by the government to lead this restoration project by, completing the Al-Shaab gym with a significant extension to cover the stands previously outside, and integrating new surfaces to receive cultural and sporting events, as well as restaurants and contemporary public reception facilities. This project was designed in association with Anthony Béchu and Adil Alkenzawi. Studies were completed in early 2014, and the beginning of work planned this year. 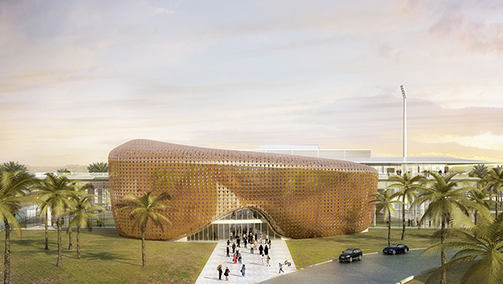